Panorama was a "sister" label to Jerden Records, Jerry Dennon's flagship company. It was founded in 1964 as a proving ground  for recordings that might  resurface on Jerden or national labels. Later, Piccadilly Records supplanted Panorama.

1996. This album may also have been reissued  in compact disc format as Appaloosa on Wildfire Records. Other possible format variations and label number not available.

#LP-102
MAHAFFAY and the INDIVIDUALS, CHUCK
Music For Young Batmen, Ipanema Girls, And Most Everybody Else!

Side Two, Track #3 on Battle Of The Bands compilation album.

Side 2, Track #7 on compilation lp Battle Of The Bands

:Side Two Track 5 Battle Of The Bands Compilation LP

First release of this tune. Never issued in 45 rpm format.

First release for this tune. It was never issued in 45 rpm format.

Side 2, Track #7 on compilation lp Battle Of The Bands Volume 2

Initial release of this recording. Never issued in 45 rpm format.

"Tuff Enough album reissues:
1.) 1986. Side Two, Track #5 on compilation lp Highs In The Mid Sixties Vol. 14; The Northwest Part Two: Out Of The Slime

MISC NOTES: On this disc band name is The Mercy Boys

"Batman" was recorded in April, 1965 when the band was still known as THE IMPERIALS. The track remained unreleased until, coincidentally, the soon - to - be popular Batman series debuted on ABC TV. At that time the group went back into the studio for a remake. It was this second "Batman" that, along with "Flash and Crash" was issued in early 1966 as Panorama #28.

According to guitarist Mac Park: ("Batman") actually got written up in (the entertainment trade publication) Variety........They referred to it as containing tasteless and inept vocal work (and) loud and obnoxious guitars."

As for "Flash and Crash" Park says:  the song "has nothing to do with flashing and crashing! Jeff Beals, Dan Denton and I would just sit around and play with lyrics until we got something that worked."

Known Label Variations:
1. A - B promotional disc.White background with black numerals and letters including words PROMOTIONAL COPY   (spindle hole)  NOT FOR SALE 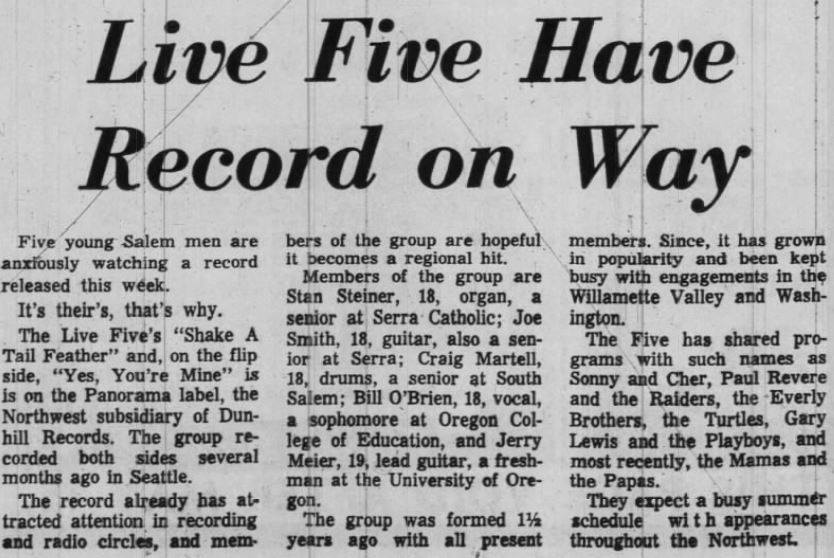 #35
MAHAFFAY and the OUT CROWD, CHUCK
"Waltz For The New York Mets (With Apologies to "Melodies Of Love") /

#35
MAHAFFAY and the INDIVIDUALS, CHUCK
/ "Take Me Into The Ballgame"

#36
TOM THUMB and the CASUALS
"The Draft" / "Irresistable You"

[HEAR IT] "The Draft"
https://www.youtube.com/watch?v=uwjbNz-5ZbM

MISC NOTES: Initiallly catalogued as Panorama #101. (11/65) Never pressed or released under that number.

Cataloged on Panorama but never released on this label. See instead:  Piccadilly #224, et. al.

MISC NOTES: "It's Tomorrow" cataloged on Panorama, but never pressed/released on this label. See instead Piccadilly #225 and Epic #5 10123.

MISC NOTES: Catalogued on Panorama,, but never released on this label. See instead Piccadilly #235.

Cataloged on Panorama, but never released on this label.

Cataloged on Panorama but never pressed/released.