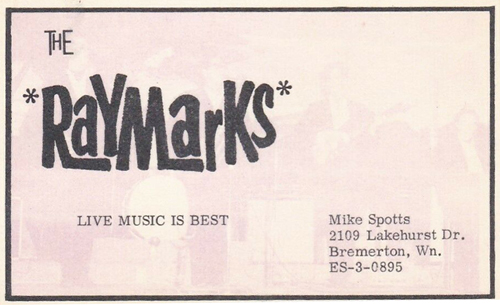 THE ORBITS AND THE SHARPS were Bremerton, Washington’s, first generation of homegrown rock ‘n’ roll bands. The Orbits held a steady gig for over two years, playing wild Saturday night dances at the nearby Lemola Indian Reservation. In 1962 the combo – which included Ken Huff (guitar), Larry Trudeau (bass), and Terry Selvidge (drums) -- added Mike Spotts (keyboards) and continued rockin’ the U.S. Naval port town. But in 1963 Selvidge jumped ship to join the Rogues, who scored the prime gig playing teen-dances as the house-band for Bremerton’s historic Perl’s Ballroom. [As seen in this photo.] 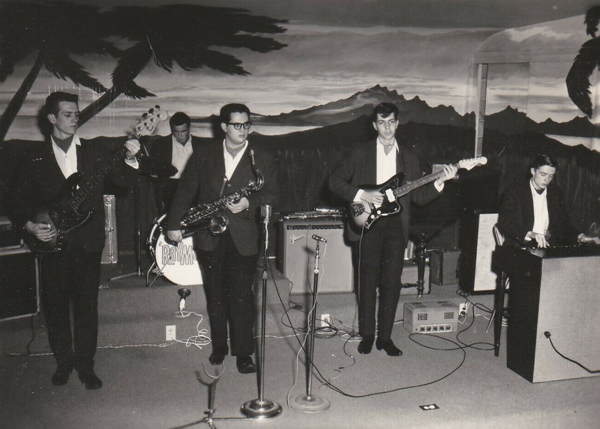 Meanwhile, the rest of the Orbits added Jack Ensign (drums) and John Metzger (sax) and began working as the Galaxys. By 1964 Selvidge had rejoined, and Greg Pettit had replaced Metzger when he left for college. After becoming aware of the existence of the Tacoma-based Galaxies, the group consulted an electronics publication and chose a new name – the Raymarks (a technical term denoting a signal on a radar screen).

The Raymarks performed at school sock-hops, at occasional dates at Tacoma’s Red Carpet teen club, and numerous fabled dances at the Eastpark Community Center. During this period the Raymarks & Co. featured a young local singer named Gail Davies. Then when the group bought time at Seattle’s Commercial Productions studios, they chose to cut two of their favorite instrumentals. One was an original, “Back Fire,” while the other was a popular standard from the Northwest teen scene’s canon, Nat Adderly’s riff-driven masterpiece, the “Work Song.” When they approached Jerry Dennon – Seattle’s record mogul who was responsible for launching the Kingsmen’s 1963-1964 hit “Louie Louie” – he instantly signed them to a five-year contract, bought their Master Tapes, and issued the single in December 1964.

Self-managed, the Raymarks began to break out on the region’s teen-dance circuit, playing big rooms like Olympia’s Evergreen Ballroom, Burien’s Target Ballroom, and Parker’s Ballroom in Seattle. Their second single, “Louise” / “Dollar Bill”,” was cut by audio engineer Kearney Barton at his Audio Recording studios in downtown Seattle and released in March of 1965. “Louise” was a thinly veiled gender-reversed knock-off of the region’s signature song, “Louie Louie,” and both it and the flipside featured vocals by Spotts. “Louise” did receive a bit of local radio airplay but never really gained much commercial momentum.

About this time the Raymarks appeared on local television – KING’s Soundstage and KTVW’s Rock-A-Go-Go – and they also received favorable publicity in Billboard magazine (“one of the NW’s up and comers”) and in a short-lived local record biz rag called the Disc-A-Go-Go.

By late-summer the Raymarks had recorded their third effort, a good cover version of a minor-classic R&B tune, “Dr. Feelgood,” back by Spotts’ own “Louie”-tinged “I Believed.” Also recorded at Barton’s studio, and issued in November ’65, this single was distributed nationally by the big-time ABC-Paramount combine. A wonderful test acetate discs exists of yet another, albeit unreleased, Raymarks’ coupling. Both original tunes – “I Can Tell” and “Down Home Girl” – have prominent vocal harmony arrangements, surely displaying evidence of the British Invasion’s influences.

The original Raymarks performed one of their final shows – the 1966 KJR Battle of the Bands two-day event at Seattle’s Lake Hills roller rink – on the very day that both Huff and Selvidge each received their Vietnam Era draft notices. But, competing against 28 other combos, the Raymarks won and took home the trophy. Chuck Snyder replaced Huff and then Terry Carter was added when Pettit was also drafted. As the Raymarks faded, Spotts joined with former Little Bill & the Bluenotes drummer, Tom Morgan, and guitarist Denny McLeod, forming the Icemen who gigged at Perl’s and other local nitespots.

Meanwhile…through an amazing chain of events, both Huff and Selvidge wound up serving their military duty in Korea, and for 18 months they entertained fellow troops in a show group that they dubbed the Raymarks! Then Spotts, Trudeau, and a Tacoma R&B guitarist, Larry Curtis, joined forces and split for Los Angeles where they gigged in nightclubs for two years, occasionally backing singing stars including the Shirelles, the Rivingtons, and Ike & Tina Turner.

By 1969 Spotts was back in the Northwest playing with what must have been a serious spacejam band: the Interstellar Tool & Die. That summer he began his time with Seattle’s all-time heavyweight acid-blues-rock band, the Floating Bridge (which at times also boasted ex-Wailers guitarist, Rich Dangel, the Dave Lewis Trio guitarist, Joe Johansen, and/or the Icemen’s Denny McLeod). At the first Sky River Rock Festival, Spotts appeared with them, manipulating previously recorded tapes of backwards guitar tracks and various other spacey effects, creating an early form of high-tech / acid-rock / performance art.

Then, from late-1970 into 1971, both Spotts and Selvidge joined on with Seattle’s seminal progressive / psychedelic / blues band, Crome Syrcus. By ’72 Spotts, Morgan, and Curtis joined with Bremerton guitarist Lee Parker (ex-Sharps), and Rick Burton (bass), forming El Funko, which toughed it out on the increasingly commercialized Seattle scene in 1974. Over the years Spotts also worked with bands including December’s Children, Early Warning, Mahriah, Lazy Jack, Danny Ward & Reality, Tuxedo Junction, and the Maxfield Panzer Band. Meanwhile, Gail Davies became a national music star who scored on Billboard magazine’s Top-40 Country charts numerous times after her first smash hit “Round the Clock Lovin’” in 1979.

[Note: This is an edited version of an essay that originally appeared in the “Northwest Music Archives” column of Seattle’s The Rocket magazine back in March, 1985.]

[HEAR IT HERE] "I Believed"
https://www.youtube.com/watch?v=uWz7BWY8P20

2.) A - B promo disc. White background with black lettering and greenish JERDEN JERDEN JERDEN. All other numerals and lettering black including PROMOTIONAL COPY NOT FOR SALE*

Both Distributed By ABC-Paramount Records, Inc. Made In U.S.A.