Misc Notes:  This product features recordings by an array of different musicians & singers who are included in this website's Artist category.

Photos of station disc jockeys on back of jacket

No Northwest Artists Are Featured On This Disc

Power Of Ten Volume 2
Excursion Records
#[No # On Label]

Side A
1. Rockaway Beach - 2 SICK MONKEYS
2. Teenage Lobotomy - THE DEHUMANIZERS

Side Eh
1. It's A Long Way Back - HANSON BROTHERS
2. We're A Happy Family - INVASIVES

National recording package designed for release in conjunction with country music stations across the U.S.

No Northwest Artists Featured on Disc.

Birth Of The Blues
Spokane Records
#9

"It's A Big, Big Christmas" "Suddenly Its Christmas" / "What I Wouldn't Give" "The Secret Of Christmas" "Bigfoot
Pacific National Bank
#IRC2558 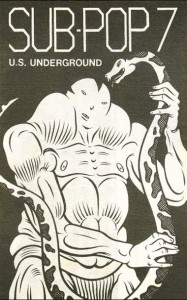 A "CHRISTMAS" STORY by Bruce Smith

The 1965 Christmas season found a unique record in Northwest stores. It was an album of Christmas tunes entitled simply "Merry Christmas." A Christmas album in itself was not unusual. What was different about this particular Christmas album was that it featured relatively quiet tunes by three Northwest rock groups, THE SONICS, THE WAILERS and THE GALAXIES. The three Tacoma, Washington groups were recording for that city's Etiquette Records, a label owned and operated by members of The Wailers. It was within that band that the idea to bring the groups together on a Phil Spector-like seasonal package was born. Production was begun in late summer '65  at  Wiley-Griffith Studio, a small Tacoma recording facility with egg carton walls. Members of all three bands intermingled on the selections which included old standards, originals and familiar melodies with gimmick lyrics. John "Buck" Ormsby, bassist for the Wailers remembers: "There was no heart in any of the tunes, but we thought they might sell. Problem was, the whole project fell flat on its face. One of the songs by the Sonics was called "It's Christmas." It was the melody from "On Broadway" (a popular song done a year or so earlier by The Drifters) with Christmas lyrics (by Gerry Roslie). The package was finished and on the market when word came that we couldn't get publication rights to use the (On Broadway) melody. We had to pull the whole works. What a fiasco." Withdrawn from stores, "Merry Christmas" faded into oblivion. But, as so often is the case, gone did not mean forgotten. Today copies of  the original ill-fated album are one of the most rare and sought after Northwest record collectables.

2.) 1984. Album was reissued. Reissue featured same cardboard jacket as its earlier cousin, but the label was first design with red with black, logo, numerals and lettering.

Battle Of The Bands
Panorama
#LP-103

4.) When The Saints go Marchin' In (Theme And Variations)

5.) Every Time I Feel The Spirit

Selections from this lp later appeared on Voyager CD #367

Selections from this lp later appeared on Voyager CD #367

Subtitled: Songs from the Taverns of the Pacific Northwest

All artists from Seattle, WA except as follows:

The History Of Northwest Rock Volume I
The Great Northwest Music Co.
#4003

Side Two
1. I'm In The Mood For Love - SOUND DESIGN
2.  What Are You Doing For The Rest Of Your Life? - LAKE WASHINGTON HIGH SCHOOL JAZZ CHOIR
3.  So What -  STUDIO SINGERS
4.  It Ain't No Use -  SHORELINE COMMUNITY COLLEGE JAZZ CHOIR
5.  Almost Like Being In Love -  CENTRAL WASHINGTON STATE COLLEGE
6. When I Fall In Love - EDMONDS COMMUNITY COLLEGE

MISC NOTES: Album was mostly recorded on location at the 1975 Workshop.

MISC NOTES: All Original Music - All Northwest Talent Presented By 97 AM & FM 101

Side One
1. Kicks (Cynthia Weil - Barry Mann) - PAUL REVERE & THE RAIDERS
2. Night Train (Lewis Simpkins - Oscar Washington) - PAUL REVERE & THE RAIDERS
3.  I Could Be So Good To You (Nitzsche - Dempsey) - DON & THE GOODTIMES
4. Any Way The Wind Blows - THE SONICS
5. Will You Love Me Tomorrow (King - Goffin) - THE SPRINGFIELD RIFLE
6. Blue Turns To Gray (Richard - Jagger) - DON & THE GOODTIMES
7. The Owl & The Pussycat (Sheridan - Balzotti) - THE BARDS

Two disc set of rhythm and blues music played  by the late  Gabe McManus on the jukebox in his Shamrock Tavernin downtown Seattle. . At the time of the discs' release the former tavern was the Nikko Gardern restaurant and lounge. No Northwest artists are included.

Sponsored By The Eugene Downtown Association

In that article producer/guitarist Norm Durkee characterized "Bonus Was A Killer" as a slow, but powerful rock number in the tradition of The Beatles "Hey Jude." Lyrical focus of the song is on an eighty six year old woman. Durkee decribed "Rustle Up A Hustle" as a rock - boogie oriented tune.

All recording credits on paper insert

MISC NOTES: “Subterranean Pop is a fanzine dedicated to independent recordings from the Northwest and the Midwest. All record reviews are highly prejudiced and reflect the personal tastes of the editor.” Produced by Bruce Pavitt.

Each album accompanied by a computor card ballot for voting on best band/song.

There are NO Northwest artists on this album.

Side One
1. The Waco Kid
2. Rainy Seattle Days
3.Down The Hall And To The Left
4. Once Upon A Spider's Web
5. Spring Fever Blues

Sampler album of artists with lps  on Jazz Man label.

On label disc # is JAZD 5050. Herein the prefix D has been dropped for cataloging purposes. 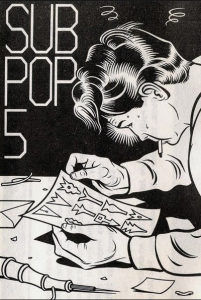 *???? - Lp jacket notes do not clarify which band performed on these songs!!

KMOK  is an FM radio station broadcasting from Lewiston, ID. In 1983 it featured a rock format. As of 2016 it was a country music station.

Compilation lp featuring regional bands/artists. Each album was accompanied by a ballot for voting  on these bands/artists in the nationally sponsored 1983 Miller High Life Rock To Riches music contest.

At least some packages were accompanied by a discount coupon good in selected record and food businesses located in Lewiston, ID as well as Clarkston and Pullman, WA

Side B
1. Workin' For MCG - WILD DEBBIES
2.  Electric Eye - LA BALEINE
3. Waiting For My Girlfriend - CROSSTOWN RIVALS
4. Be My Test Tube Baby - STRIKER
5. I'm Only In Love In My Sleep - TIM OLESON 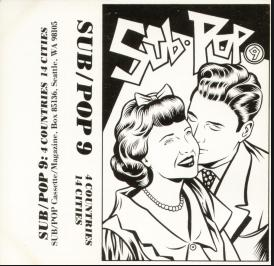 The KEZX Album Project
FM 99 KEZX
#[No # On Record Label]

MISC NOTES: Recorded  Live on the KUOW radio stage at the 1985 Northwest Folklife Festival May 24 - 27, 1985 at the Seattle Center Seatte, WA

Christmas In The Northwest
Children's Hospital And Medical Center
#SLP - 101

All recording credits on inner sleeve

Metal Meltdown Volume One
Decibel Shock Records
#[No # on label]

3.) The Queen Annes "If You Could Only See Me Now"

6.) The Bombardiers "What Do You Know About Love"

Side One
1. North By Northwest - DANNY O'KEEFE
2. Over The Hurt - CHUCK CONLON
3. Looking Out The Window -  SETH BLAIR
4. Pioneer Square - REILLY AND MALONEY
5. Oasis On Legs - SPACE
6.  Jesus Cooks - REDEKER

Album title on jacket front only = City Of Thorns

Lowlife
Ironwood Records
#[No # On Label]

Side One
1. It's Not Raining - THE DAVE STEWART TRIO
2. Trick Bag  - JO AND THE JOMATICS
3. How Long I Wonder -  TOM McFARLAND BLUES BAND
4. Sneaky Pete - JOHNNY WARD AND THE JOKERS
5. We're Having A Party - THE MATHER BROTHERS

Side Two
1. She Walks Right In -  BILL RHOADES AND THE PARTY KINGS
2.  I Got 'Em Bad - THE LLOYD JONES STRUGGLE
3.  Hard Times -  NORMAN SYLVESTER
4. Get Tough -  THE TERRY ROBB BAND
5. You 're Gonna Make Me Cry -  CURTIS SALGADO AND THE STILETTOS

MISC NOTES: Subtitle on LP jacket = The Original Singles. Not all tracks, however, were issued as singles.

Subtitled: A Collection Of Your Favorite Oldies

Side One
1. Til You Get The Chills - BRENDA KUTZ
2. Believe - WALT WAGNER
3. Keep The Spirit -  TICKLE TOON TYPHOON
4. You Can Really Make Christmas For Me - PAM CRAMER
5. What I Really Want For Christmas - MEGAN HUNT
6. The Ukrainian Bell Carol (Carol Of The
Bells) - THE COLUMBIA BOY CHOIR

All recording credits on paper insert

MISC NOTES: Six album boxed set. Reproductions of five Etiquette releases and one Sande label release. Individual record sleeves are made of lightweight white paper with all graphics, numerals and lettering in black. Box set had no Serial Numbers.

Compilation album with limited pressing of 650

Eye Of The Needle
Vagrant Records
#2828

Estrus Half Rack: The 12 Drunkest Bands In Showbiz
Estrus
#ESBX3

Mayfair Bound
Too Many Records
#TM 58

A Side Artists
1. Boyckott
2. Motherload

B Side Artists
1. The Flies
2. The Fumes
3. Velvet Pelvis

We Are All Guilty
Outcast Records
#001**

All My Friends Can Sing
Criminal Records
#CR - CD19

According to producer/drummer Paul Jones the tribute was "to all that sang and to the original artists."

All selection, except Side One, Track #3 by THE SONICS, had been released in 45 rpm format during the 1960s. "High Time"  was originally  issued only as an album selection.

MISC NOTES: The Northwest Battle Of The Bands Volume One

Power Of Ten
Excursion Records
#[No # On Label]

Santa's Not Dead: It's A Green Monkey Christmas!
Green Monkey Records
#[No # listed on labels.]

It Crawled From The Basement
Green Monkey Records
#GM1001

It Crawled Down The Chimney, It's Another Green Monkey Christmas
Green Monkey Records
#GM2011

MISC NOTES: [From LITA website] "In 2004, Light In The Attic and DJ Supreme La Rock compiled the first ever set of vintage Pacific Northwest soul, funk, and R&B, Wheedle’s Groove: Seattle’s Finest In Funk & Soul 1965-75 (LITA 009). Nearly a decade on, the Wheedle still grooves and with this we give you our most ambitious release to date. Over three years in the making, Wheedle’s Groove: Seattle’s Finest In Funk & Soul 1965-79 is a lavishly packaged vinyl singles box set featuring ten impossibly rare 45s (some fetching thousands on the collector’s market) from Seattle’s vintage soul scene. Limited to only 2,000 hand-numbered copies worldwide, the ten 45 RPM set is housed in a gorgeous custom made magnetic flip-top box and features meticulously re-mastered audio and original label art. For those who must hear these vintage tunes and can’t relax with a tipple at the turntable, we’ve even included a free download card for all tracks. But wait, our love for Seattle soul could not rest there… we’ve included a massive 7″×7″ glossy 96-page book with new liner notes by Jonathan Zwickel that features new interviews with the regional musicians and key players, along with never before seen photos—from smokey Seattle clubs to Patrinell Staten singing at Jimi Hendrix’s funeral. Plus, a treasure trove of local music ephemera, a replica Seattle SuperSonics trading card, and countless archival gems. To round out this lavish set, we’ve also added a very special CD by Seattle soul titans Robbie Hill’s Family Affair: Gotta Get Back: The Unreleased L.A. Sessions, which though originally recorded in 1975, remained lost until the recent discovery of the original multi-track masters. The tapes were carefully mixed by renowned engineer and producer Steve Fisk. To say it’s a miracle that these tapes surfaced would be a massive understatement. A true love letter to Seattle and its Soul & Funk music scenes, Wheedle’s Groove: Seattle’s Finest In Funk & Soul 1965-79 is a treasure not to be missed."

Compilation album based on released/unreleased material from Garland Records, Salem, OR

Kearney Barton: Architect of the Northwest Sound
Light In The Attic
#LITA 168

MISC NOTES: This is a 29-song compilation CD featuring a wide array of artists, all recorded by Kearney Barton.

MISC NOTES: Various artists on acetate disc. Personnel is noted in handwritten ink on pin white cardboard jacket. It remains unknown if this disc was produced in conjunction with an Oregon Barbershop Quartet event -- or if it is a sort "greatest hits" compilation from various sources.